The end of the school year is always a big event for both children and parents.  For us the end of this school year is like reaching the end of a marathon.  By the time our daughter starts her Summer holidays she will have survived and flourished during her first year of French school.  She will be speaking French and correcting us (Mum you’re so embarrassing when you try to speak French is becoming a frequent refrain!) and we will have moved again from our rented apartment in Toulouse to our new home and business in the countryside.

What have we learned from our first experience of French school?  Firstly, none of us would have got this far without the amazing teachers and directrice of Ecole Benezet in Toulouse.  They have all been so supportive of our daughter and her fellow classmates in the ‘helping class’.  We will never be able to thank them enough for all of their efforts with both her and us.  They have encouraged the children from even the most challenged backgrounds to find their place at school.  We were told at our first parents evening that our children in the helping class ‘enrich’ the school with their different languages and cultures.  An attitude which stands out in the context of the ‘them and us’ view of immigration and difference which is so prevalent across our world at the moment.  I cannot explain how reassured I felt by those words; that our daughter was not seen as a burden to the school but an asset.  They obviously didn’t anticipate her giggles when they speak English with her!   We, in turn, have tried to support her as much as possible and have participated whenever we could in school events, undertaking training in how to be a parent assistant in the school swimming classes and baking many, many biscuits for fundraising events.

There has been another theme throughout the year which we have only recently understood, dance.  When we first arrived and met the teacher of the helping class she explained to us that there would be a dance show at the end of the year in which all of the children in her class would participate.  As a keen dance fan I was delighted but a bit perplexed as I hadn’t read anything about dance being a part of French school life.  Throughout the year since then our daughter has come home and when asked about her day explained that she was dancing in the hall or had met the choreographer for the dance show.  Neither of us made much of this as we assumed the dance show was a school event and the choreographer was one of the teachers we didn’t know.  We couldn’t have been more wrong.  It slowly dawned on us that there was more to this when our daughter explained that the choreographer was the nephew of one of the teachers in the school and was a professional dancer in New York.  Another time we learned that he had danced with the Merce Cunningham Company.  The calibre of the dance event became more and more apparent.  Once we learned that the performance would be held in the Jacobins, a thirteenth century monastery and church complex in the heart of the city which now opened its doors for artistic festivals we realised that this was bigger than the usual school show in the gym.  We were given a rehearsal timetable for the dance show which involved spending nearly two weeks rehearsing at the school and the Jacobins.  The children took packed lunches on some days in order to be able to stay all day for dress rehearsals.  We arranged for Granny and Grandpa to come over to see the big event and to babysit for us so that we could attend on both evenings.

The show was absolutely wonderful, the pride we felt as we saw our shy daughter stride out confidently as part of the first group of dancers onto the performance space was immeasurable.  Every child had their part and worked together to produce a fluid piece of modern dance inspired by the works of Merce Cunningham.  The effort made by everyone involved to produce a piece of dance that required such a high level of concentration by the children was so impressive.  The cheers and applause at the end of the performance and the delighted but bashful smiles of the children were a joy to see.  At the end of the second performance we met the choreographer, Dylan Crossman, who fortunately speaks fluent English.  I was quite starstruck but managed to say how much we appreciated the opportunity for our daughter to learn about dance and how impressed I was that he and his uncle were working with the most challenged children in the school, for some of whom the experience of being applauded and congratulated was probably unknown until then.  My thanks were probably over the top but as a true star performer he took it in his stride.  I had remembered to thank the teachers as well but my vocabulary doesn’t extend much further than fantastique and incroyable.  By the end of the evening I had thanked nearly everyone present including other parents for producing such amazing children!

Our experience so far has only been of one school but I can say that that particular school has been the best that we could have hoped for.   Now on to the next one … 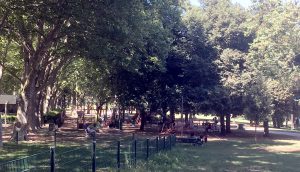